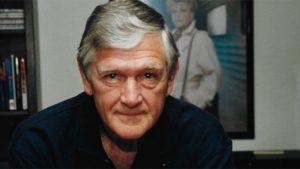 This year, we are proud to present the 1st Annual Bruce Lansbury Tribute Playwriting Fund. Each summer, all proceeds from this fund will sponsor both emerging and nationally recognized playwrights to participate in the Durango PlayFest.

Bruce Lansbury, an award-winning British-American television producer and writer, playwright and screenwriter, lays claim to a long list of creative and successful works. Whether for television, film or theater, a great part of Lansbury’s success was due to his ability to craft imaginative stories with an unconventional mix of fantasy and realism, and lots of surprises. He knew how to keep his audience on edge, drawing the foreboding from the mundane, charging storylines with unpredictable twists and turns, and then lightly sprinkling them with crepuscular humor. Plot surprises don’t come easily because audiences are savvy. But Lansbury’s mastermind succeeded in gluing viewers to their screen, week after week, year after year, for well over 50 years.

Lansbury is undoubtedly best recognized for his writing and production of such iconic television series as: “Murder She Wrote”, “Wild”, “Wild West”, “Mission: Impossible”, “The Fantastic Journey”, “Wonder Woman”, “Buck Rogers in the 25th Century”, “Knight Rider”, “The Powers of Matthew Star”, “The Magician” and “ABC Movies of the Week.”

He supervised production of “The Brady Bunch”, “Happy Days”, “Love American Style” and “The Odd Couple”, as well as produced and/or wrote a number of films produced for television.

But Lansbury’s greatest contribution was that of a mentor. During his golden years in television, he was incredibly generous with his time and talents, always with an apprentice at his side. While shepherding young aspiring writers and production professionals through the industry, he mentored with a critical, yet good-humored eye. He guided them over stumbling blocks, provided invaluable counsel and ultimately, shaped countless stories and careers. Always a coach, advocate and champion of emerging talent, he launched hundreds of careers in the production world.

Your gift to the Annual Bruce Lansbury Tribute Playwriting Fund will continue this legacy and will help spawn new talent, ignite creativity and bring together and inspire creative talent from all corners.