Check below for information on last year’s schedule of events.

The 2019 year had several ticket options! You could create your own festival experience by purchasing tickets to individual shows using our Festival Schedule as a guide OR by purchasing a Full-Fest Pass and choosing between 4 pre-made schedules that allow you to see every show and attend our Festival Party! Feel free to print your tickets or just check in at Will-Call, you’ll have you on our list! 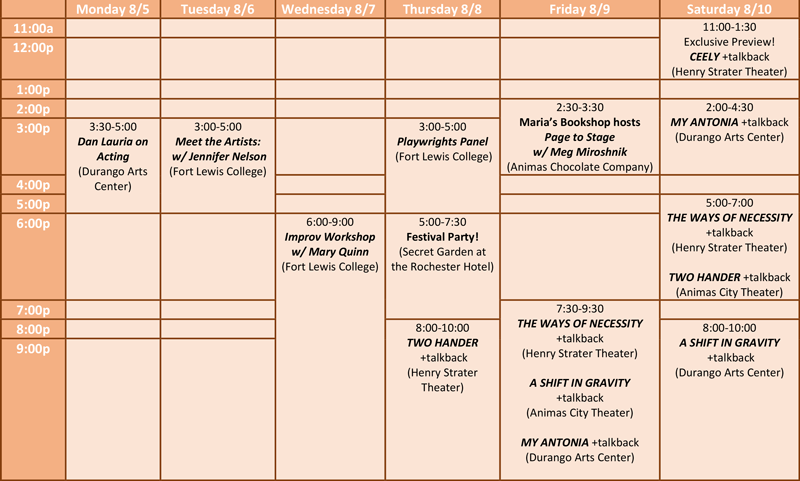 Want to see every show? Well, we’ve put together 4 different options so you don’t have to think about it! Choose an itinerary that works for you and enjoy the festival party on us.  Your festival begins at The Rochester Hotel Secret Garden: 726 E 2nd Ave, Durango, CO 81301.

HERE IS YOUR SCHEDULE FOR PASS A:

HERE IS YOUR SCHEDULE FOR PASS B:

HERE IS YOUR SCHEDULE FOR PASS C:

HERE IS YOUR SCHEDULE FOR PASS D:

After a week of rehearsing and rewriting, come see the outcome in these readings with an interactive talkback to follow.

Two Hander explores the seesawing relationship between Ned Harper, a one-time off-Broadway playwright who was once considered to be the next Mamet but is now teaching at the New School in New York City, and his star pupil, Sheila Lawrence, a bright but unhappy Westchester housewife who has serendipitously enrolled in his beginning playwrighting course. Sheila convinces Ned to collaborate with her on writing a “two hander” (a play with only two characters) and they embark on a literary adventure which quickly evolves into a heated love tryst that can only end in ultimate betrayal. Over the play’s twenty year time span, we watch these two vital verbal gymnasts ride the waves of Broadway success, hard won independence, personal heartbreak and, at the final curtain, arrive at a place of deep mutual understanding.

+ A Shift in Gravity

What happens when two best friends, female authors, one black, one white, living and working on Martha’s Vineyard, and success is imminent for one and the other usurps it, aided and abetted by a handsome young male journalist who has dreams of his own…?

Playwright Stephen Nathan returns to PlayFest with a new play to be directed by Actor Jon Tenney, starring Wendie Malick and Dan Lauria!

Richard is a successful accountant who feels that his life couldn’t be better. He has a wonderful, somewhat neurotic family and a thriving practice which he shares with his oldest son. All is well until he receives some devastating news. He has a fast moving cancer that will overtake him within the next couple of months. The family tries to rally but Richard has been their rock and each member struggles to deal with the coming loss. This is compounded when Richard reveals a secret he has kept from them, one that will alter their lives as much as his upcoming death. We watch as their family is tested and learns what love is in the face of overwhelming adversity.

In this exuberant new adaptation of Willa Cather’s 1918 classic novel, new immigrant Ántonia and orphan Jim Burden strive to make lives for themselves on the Nebraska prairie. Bursting with music, adventure, and emotion, this coming-of-age tale wrestles with the notion of what it means to be an American. My Ántonia asks urgent questions about assimilation, the American experiment, and can we ever tell someone else’s story? that feel as resonant today as they must have a century ago.

Print tickets or check in with ID at will call. Talkback to follow.

In a play that’s part comedy, part family drama, we meet Ceely. Born and raised in a classic mafia family, she’s been haunted her whole life by the one gift you wouldn’t want: clairvoyance. What she sees clearest are deaths–from old age, accidents, murders . . . The head of the family, aware of her ability, exiled her to the countryside. But she’s only as safe as she is silent, and she longs to see her family again. Her brother Beeno, assigned to keep an eye on her, has grown nervous since Ceely started talking to a young journalism student. What’s she talking about? Where’s that information going? This is not the kind of family that grants do-overs.

NOTE: You can only purchase 1 ticket at a time.
If you are buying multiple tickets please make them separate donations.

Buy a ticket to our exclusive festival party. Mingle with the artists and discuss plays with the community.

Come meet and mingle with the PlayFest playwrights, actors and directors, enjoy live music by one of Durango’s favorite groups, Loki Moon, food and a cash bar in the magical atmosphere of The Secret Garden at The Rochester Hotel. After the party, guests can walk over to the Henry Strater Theatre for the 8:00pm reading of Two Hander. Doors open at 7:30pm.

Whether it’s acting, directing or playwriting, one of our guest artists will be hosting an exciting workshop and events  free to the community.

Our Playwright, Meg Miroshnik, and Willa Cather Foundation’s Executive Director, Ashley Olson will discuss Meg’s bold new play adaptation of Willa Cather’s 1918 classic novel My Ántonia. Meg’s play will premiere with a reading on Friday night at 7:30p at the Durango Arts Center, but you can learn about it here first! Want to buy of copy of the classic? Meg would love to sign it for you!

Back by popular demand! Dan Lauria (Actor) has appeared in over 70 television episodic programs, more than 20 movies of the week, plus a score of motion picture credits. Dan is a very familiar face to the off-off and off-Broadway, and regional theatre scene having performed, written, or directed over 50 professional stage productions.

This year Dan is returning and performing in TWO new works, Stephen Nathan’s Ways of Necessity and the Exclusive Preview of Ceely by Lee Blessing. Dan will be presenting on his personal and professional views on acting and answering your questions. Don’t miss your chance to Meet the Artist!

Discover what a shared vision of a collective creative experience might be from the perspective of both director and participant. How does the director engage and encourage actors to think outside the box so their imaginations can soar?!

Mary is ready to share her Improv expertise with you and have a downright fun evening full of laughs!