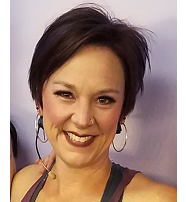 Mandy performs locally with Merely Players; favorite roles include Aldonza in MAN OF LA MANCHA, Aimee in THE HUMANS, Fiona in SHREK and Mrs. Banks in MARY POPPINS (for which she won Best Supporting Actress in a Musical from Broadway Word-Denver). Mandy was also seen with DAC as Sally Bowles in CABARET!, Fastrada in PIPPIN, and Justice in ROCK OF AGES. Mandy’s theatre career began at age 10; she toured regionally throughout high school, then graduated from Washington & Lee University with a BA in Music and Theatre. After graduation, Mandy toured nationally for two and a half years, after which she settled in Fort Collins, CO, where she performed with OpenStage Theatre and Company, winning an Opus Award for her portrayal of Dromio of Syracuse in an all-female production of COMEDY OF ERRORS. Mandy also sings with the Durango Women’s Choir, is a Deacon of the ELCA at Christ the King Lutheran Church, and has an amazing teenaged daughter.